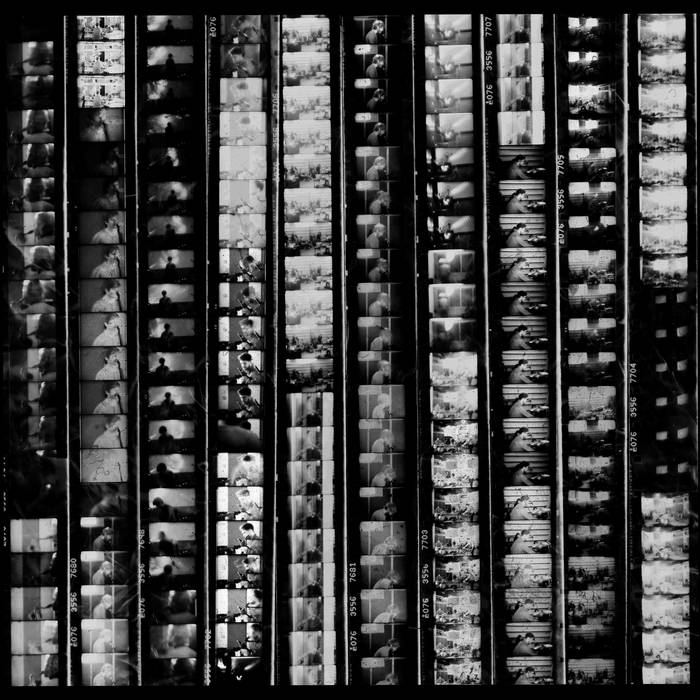 Bog Bodies formed out of a shared interest in creative intersections, for example, between abstraction and gure, improvisation and composition, production and performance. The decision to include Ben, a 16mm lm maker, in this project meant that we’d necessarily be exploring an even more fundamental intersection, one between visual and sonic mediums. This shifted the focus of the work early on from what we’d create to how we’d create it.

In June 2015, we were given the opportunity to develop this collaborative working process during a two-week residency at
the Model Contemporary Arts Centre in Sligo, Ireland. This intensive work period gave us the space to and a joint method of composing and playing using sound and moving image.

The multi-media nature of Ben’s practice suggested a clear starting point for us. He arrived in Ireland, by sea, with three lm projectors, various boxes of lm processing chemicals, and a bin bag of 16mm leader on which he had composed sound-films by scratching, painting, and applying lettraset transfers to the entire lm surface, including the optical soundtrack. This process, inspired by the film artists Norman McLaren and Guy Sherwin, created an abstract moving image that could be both seen and heard. Played as loops from three projectors, these films provided the dynamic patterns and sonic textures that would form the basis of Bog Bodies’ aesthetic.

During our residency at the Model, we made our work collaboratively, but not always together. We spent our time in a theatre space rehearsing, while Ben shot footage around the gallery site, hand- processing the lm in buckets of chemicals in the shower of his residence. Once or twice a day he would come to the theatre to to say hello and listen, sometimes cutting and loading new loops into the projectors. At the end of the two weeks, when we came together in the theatre space to rehearse for the nal performance that was to conclude the residency, neither we nor Ben had a clear idea of how the work we’d been developing independently would t together. And yet, in the rst seconds of this rehearsal, it became clear that we’d been working on the same ‘piece’ all along; as we issued a low, resonant tone into the space, the rst gigantic image of Ben’s lm stood before us: the still, monolithic form of the mountain Knocknarea that had loomed on the horizon, in various atmospheres and lights, throughout our time in Sligo.

While this album does not serve as a document of any actual material developed in Sligo (it was composed from recorded improvisations made over a year later in a studio in Ramsgate, Kent), it stems directly from a way of working developed during the residency which we continue to renew and evolve each time we play together. The pieces incorporate sound from Ben’s lms in various ways: ‘Sea Projection’, ‘Doubling’, and ‘Residence’, for example, are made from recorded ‘duets’ with three of his ‘lettra-tone’ loops. Elsewhere, his lm sounds are captured as they were played back through our mixers during the improvisations, or have been incorporated into the compositions in post-production.

Bandcamp Daily  your guide to the world of Bandcamp